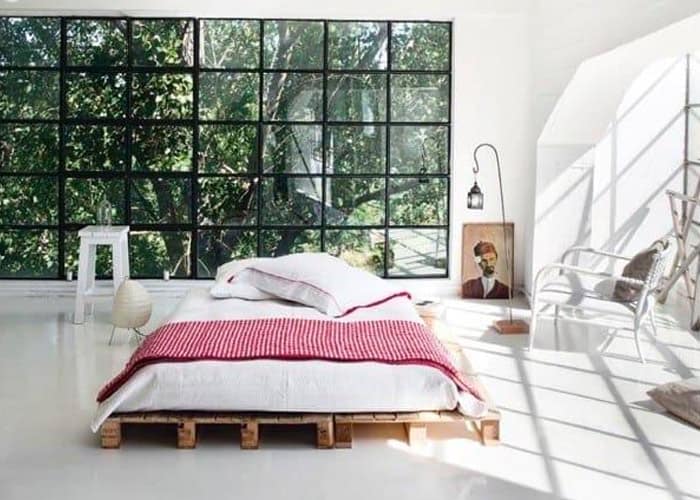 This is for many reasons.

Overall room design is important, both for saving space and for maximising conventincy.

According to interior design, the bed should be placed in the center of the room’s longest wall. The aim of this is to focus attention on the bed, since it’s generally considered to be the main focal point in a room’s design.

By placing it on a wall, it makes it very easy to fill in the room and decorate it. Adding nightstands on either side of the bed creates a sense of security and balance. In general, this type of room setup is not feasible when the bed is placed in the center of the room, especially if the room is small.

While putting a bed at the center of the room, also known as the “bed island” layout can also have its own benefits, the reasons why someone might opt against this is primarily because of the available space and size in their room.

Most people do not have large rooms with a layout that allows for plenty of space on either side of a large bed to accommodate not only a nightstand, but also enough room to walk around in and out of bed without a problem.

Additionally, it feels less grounded as opposed to having the bed against the bed.

The most obvious and popular reason as to why most people choose to put their bed against the wall and not in the center of the room is because of space.

Firstly, placing it up against a wall allows for plenty of walking space, which makes getting in and out of bed easy as pie.

People like to have at least a bit of walking space and this simply cannot be achieved with a bed island layout in small rooms. This is also why it is more common to see bed islands in larger rooms with plenty of space, as simply put, these rooms have enough space to spare not only for furniture but for walkways.

Moreover, you also have to take into account other furniture in the room. In fact, it is a common tip in interior design to place furniture up against a wall in order to maximize the space.

This way, the empty spaces serve as proper walkways, making the overall flow of the room easier to follow with the eyes.

Furthermore, you won’t bump into furniture that seems to be misplaced in the middle of the path.

This goes way, way, back, in evolutionary science. Animals like to at least feel secure or have some sort of control in their most vulnerable situation. Which is, for us humans, is when we are sleeping.

This could be a reason as to why our early human ancestors preferred to sleep up against a cave, instead of the vast outdoors: for protection or security.

It is more than just a leftover evolutionary trait, however, as that instinct to feel safe when we’re defenseless is still alive in pretty much all of us.

This is why putting a bed up against a wall provides an extra layer of safety. The headboard is also commonly placed against the wall for the same reason. The headboard not only logically fits there, but because it is located in the most vulnerable part of our body, we would want to protect it as well.

Additionally, for small children, it only makes sense to push their cots, or later, transitional beds up against the wall for precautionary purposes. It’s meant to lessen the risk of accidents such as the possibility of rolling off the bed.

Another reason why people might prefer to have their bed against a wall instead of in the center of the room is for convenience.

For one, electrical outlets are placed against a wall and it just makes it convenient to have your bed near an electrical outlet. This not only applies to our highly modern generation that brings their smartphones and laptops to bed but it is also useful for plug-in alarm clocks and night lights.

While hypothetically, a bed island could support just as many electrical outlets as needed with the help of extensions, extensions are unsightly, they clamp up space, and present a hazard when supposedly, the spare room on either side of the bed is meant for walking.

Moreover, people need nightstands for a reason, and having a nightstand pushed up against a wall makes it more secure and convenient to use.

If bottles of lotion or other items that are usually placed on a nightstand fall off, at least they have a wall to fall against. This extra measure does not exist for island beds with nightstands on either side.

In Feng Shui, it is recommended for a bed to be placed up against the wall, such that the headboard is placed against it.

The explanation here is that you would want to be supported by energy behind your back. Placing a bed floating in the middle of a room simply defeats that and takes away the energy that you need to support your back.

In Feng Shui, your back is your core. It determines your success in your career and your path in life.

Additionally, in Feng Shui, it is also recommended to have the bed of small children up against a wall, a wall as it provides them the extra support they need while growing up.