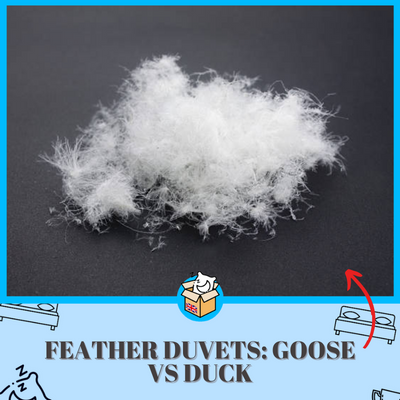 Feather duvets tend to be heavier and flatter, making them weightier than a down or standard duvet. However, they are sometimes blended with down for a plumper look and feel.

Below you’ll find a comparison and answers to other frequently asked questions like:

Which is softer, goose or duck feather?

Surprisingly, the bigger bird has softer feathers. Due to the larger size of goose feathers compared to duck feathers, more air can be trapped between layers of feathers and down, making the duvet softer and fluffier while providing a greater degree of warmth insulation.

No. Counterintuitively, goose feathers are warmer than duck feathers. This is more to do with the size of the feather than the individual soft touch of each feather.

Goose feather duvets are lighter, warmer and easier to plump up.

How do you wash a feather duvet?

It’s best to use a large capacity washing machine. It’s a challenge in a small domestic washing machine because of the size and weight of a duvet when wet.

Use a gentle mode and select a low water temperature setting, and the general consensus is that duvets should be washed every two to three months.

Can you tumble dry a feather duvet?

It is possible. Use a low heat setting to prevent the duvet material from shrinking.

For the best results, you should dry it naturally outdoors while regularly plumbing the duvet to ensure the moisture is released from the down.

What better goose or duck?

Goose. Undoubtedly, goose down is considered the best down for duvets if you like a soft, warm duvet.

Goose feathers are bigger that hold more air within the duvet. The trapped air between the feathers and down provides the insulation to keep you warm through cold nights.

What is Siberian goose down?

Typically an inferior quality product. Siberian goose down sounds fantastic, right? You can imagine a bird living in the planet’s coldest area, developing the best feathers and down available.

The truth is, Siberian goose down does not really exist. The name is used as a market ploy to make potential customers believe they are buying a superior product.

However, Siberian Goose down duvets is filled with goose down from Europe and China.

These duvets can be inferior and should be viewed as a budget option, not the best available.

Are geese plucked alive for down?

No. Geese are slaughtered and provide a tasty protein which is enjoyed across the globe. After the bird is slaughtered for its meat at around 15 weeks, the feathers and down are collected.

However, some farmers pluck feathers from live birds, which animal activists have frowned upon. Allegedly, the bird feels pain similar to having hair pulled.

This should be checked on a case-by-case basis. Most of the time, you’ll find back practices with cheaper products.

What are the best goose-down feathers?

Hungarian Goose down. The Hungarian goose produces a very soft feather larger than its relatives. The larger feathers are preferred due to their thermal retention properties.

The down feathers are, of course, smaller and extremely soft, providing that extra softness.

Does a duck feather duvet smell?

Duck feathers contain more oils. Duck feathers can indeed give off an odour in humid conditions. It’s because duck feathers have a lot of oil to disperse water. Have you heard the saying it’s like water off a duck’s back!

But, there is a remedy to the odour, the next time you take your duvet to get it laundered, just add a cap full of dishwashing detergent, this will break down the oils, and the odour should be gone for good.

Is duck feather a good duvet?

Yes. Natural down and feathers are the best duvets for thermal insulation and warmth.

The duvets are normally lighter in weight because you need less fill to provide the same tog rating as a synthetic duvet fill.

Duck feathers and duck down provide a fluffy duvet slightly heavier in weight than goose-down duvets.

Below is a table that shows some of the features and benefits of both duvets:

Are feather duvets worth it?

It’s a personal choice. If you are used to feather duvets, there is unlikely anything that will replace the feeling of feathers.

However, if you are in doubt, you should know that feather duvets tend to flatten over time because the feathers compact with use. Once the feathers have compacted, the duvet becomes uncomfortable and needs to be replaced.

What is more expensive, duck or goose down?

Goose down is more expensive. If you look at the number of ducks produced each year for food, you will understand why there are more duck feathers down on the market, which drives the value of the feathers down compared to the more scarce goose down.