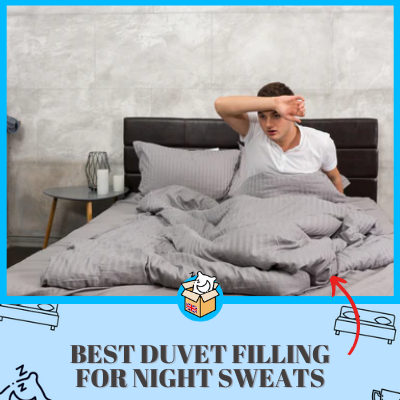 Night sweats can be a nightmarish problem for many people, so how can you prevent waking up in the middle of the night drenched with sweat?

We answer all the FAQs, such as:

Contents show
1 Why is the duvet making me so hot?
2 What is the coolest filling for a duvet?
3 Is duck down warmer than wool?
4 What is the most breathable fabric for a duvet cover?
5 Is bamboo or wool duvet better?
6 How can you stop excessive sweating while sleeping?
7 Why are you suddenly getting hot at night?

Why is the duvet making me so hot?

Night sweats are a combination of duvet filler and tog rating. If you are experiencing night sweats, it’s worth taking a look at the duvet’s tog rating.

A good all-year-round duvet in cooler climates like the UK is a 10.5 tog. This tog value should give you the best of both worlds, warm in the winter months and not so hot in the months that transition from winter to spring and autumn to winter.

Here is a table of tog values to help you make your choice:

So what about the filling? You will need a breathable filling, which allows airflow through the duvet, so your temperature is regulated.

While most duvet provides some breathability, some are worse than others for making you overheat.

If you have a synthetic hollow fibre duvet, you will have enjoyed the light, fluffy feel of the duvet, but you will notice it sleeps hot, and you can sweat.

What is the coolest filling for a duvet?

Hungarian goose down provides excellent warmth and breathability to regulate your body temperature. It is possibly the most expensive option for duvet filling, making larger duvets over £1000, so let’s get realistic and look at some affordable alternatives.

While Hungarian down provides 3 to 4 times more air circulation within the duvet, there must be an alternative or alternatives that are more affordable with similar characteristics.

It may surprise you that microfibre may be a good choice for you if you are on a budget. Microfibre duvets fillings are frequently likened to a more expensive duvet filler due to their soft and slightly weighty feel.

Moving up the price scale but still an affordable option is wool-filled duvets. Again wool is not associated with being a cooling product. Still, the truth is wool, when used as a filler in a duvet, provides outstanding breathability and wicks moisture from your body, keeping you cool through the night.

Is duck down warmer than wool?

It depends on the tog value. Duck down is a fantastic insulator and will keep you warm if you have the correct tog value for the time of year and climate.

Duck down is lightweight and breathable. Down is known to be warmer than wool. But when it comes to duvet fillings, wool comes into its own with its unique natural abilities to wick away moisture and regulate body temperature.

Wool has a major advantage over down duvet fillers because wool can be easily cleaned and is washable.

What is the most breathable fabric for a duvet cover?

Linen is the perfect choice for many duvets. It is not often considered when it comes to duvets, but the type of fabric containing your duvet filler plays a role in how hot you get under the covers.

Many duvets covers for containing feathers and down are high-grade, tightly woven fabrics that frankly add to some of the heat retentions, making you sweat through the night.

Choose a duvet cover that is breathable and soft to the touch, so you are comfortable in bed.

Is bamboo or wool duvet better?

They both have similar properties. If you are a purist, go for the wool duvet filler. Wool has gained an unstoppable reputation in the duvet market and is overtaking goose down to become the go-to for duvet fillers.

However, Bamboo duvet fillers are on the heels of wool fillers, so let’s take a look at this material.

Has anyone ever looked at bamboo and thought that would be an excellent choice for my duvet? Maybe the far east countries but not the UK.

Bamboo is mixed with synthetic materials such as polyester to make it pliable. Bamboo has fantastic wicking properties and can keep you cool through the night, so don’t throw it to one side until you have investigated further.

Bamboo is the best choice of duvet filler if you live in a warm climate, meaning it must be good at regulating body temperature and help with your night sweats.

How can you stop excessive sweating while sleeping?

If night seats are plaguing you, you may need to address some underlying problems, such as the room’s ambient temperature. Use a fan, and turn down the thermostat. Turning down the thermostat may help you sleep without sweating and save a few pounds in cash.

If you feel secure in your bedroom, open a window or two to let some nighttime air fill the bedroom, the cooling effect may have the desired outcome you are looking for.

Use a fan, a fan facing you will keep the air circulating, and the gentle breeze on your face should prevent sweats from becoming an issue. Fans are fine to run through the night, a pedestal fan will be best suited for your purposes.

If possible, sleep naked or with lightweight PJs that are breathable.

Why are you suddenly getting hot at night?

It may have nothing to do with your duvet. If you suddenly start to sweat at night, you may have underlying health issues and should consult your doctor.

Hormone fluctuations can make your body temperature rise, causing you to sweat and is common among females, particularly at night.

Certain medications can cause your body temperature to rise, such as drugs to treat diabetes.