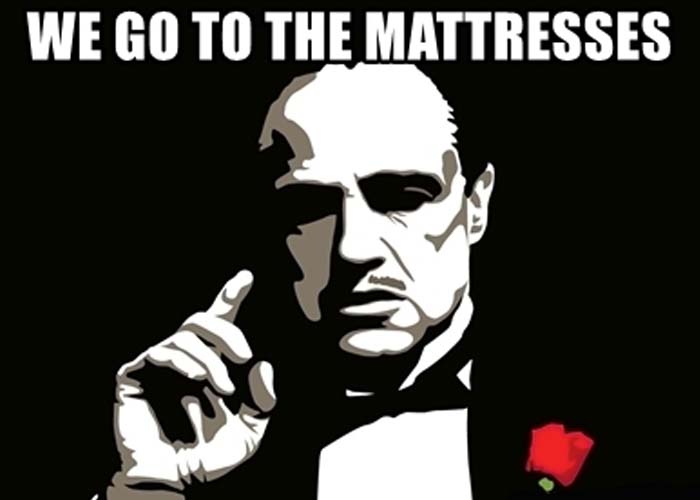 There are many sayings and quotes but, ‘Go to the mattresses” must be one of the weirdest quotes of all. When given some thought it generates all kinds of images and to be frank, if you are like me, total confusion.

Contents show
1 So, what does Go to the mattresses mean?
2 So, What Does it Actually Mean?
3 Recommendations

So, what does Go to the mattresses mean?

Allegedly, back in the good old days of 1530 AD, when Charles V and Pope Clement VII didn’t see quite things the same way, it all came to boiling point in Florence, Italy, where the English lay siege to the city.

Because Michelangelo was a general all-around genius he was given the job of defending Florence. One tactic Michelangelo used was to hang mattresses on the tower walls as a defense against English cannonballs. I guess for the day it sounds feasible!

Did it work? Who knows the story isn’t verifiable? However, the story did find its way into local folklor,e which then permeated through the ages to still be a phrase used today in Hollywood mafia movies.

You can find the phrase first being used in the Godfather. The scene from the film is where Sonny Corleone is with his brother Michael (Al Pacino) having a heated conversation with the consigliere, and Sonny Corleone says we are “Going to the mattresses”.

So, What Does it Actually Mean?

The meaning is to prepare for war, a mafia-style war where families are pitted against each other. In these scenarios, the mafia bosses would order their men to the mattress as a form of defense. The mafia soldiers would split up and stay in one room, safety in numbers strategy, which is decent if your life is under threat.

For some reason, the phrase also has the connotation that whatever happens is not personal?

The phrase can be heard in the popular film You’ve Got Mail with Tom Hanks & Melanie Griffiths, Hanks gives an explanation of the phrase while sending an email.

Latter, you can hear the phrase in the hit TV program the Sopranos where several men occupy a single room. A safe house would be a better term, and maybe a safe house is a term used by the police!

If you live in a world where the phrase Go to The Mattresses is used, it may be time to take a look at your life and make some monumental decisions about your future.

Obviously, this is a little bit of fun on the origins of a weird saying. I guess back in 1530 AD, Italian mattresses were made from straw and horsehair stuffed into rough fabric cases. It possibly could have some kind of repelling effect on a cannonball. In my opinion, it seems like a long shot.

Mattresses have certainly come a long way over the centuries giving support and comfort to make for a good night’s sleep.

I don’t suppose for one moment Michelangelo would have thought of hanging a memory foam mattress over the city walls for protection. Or would he?