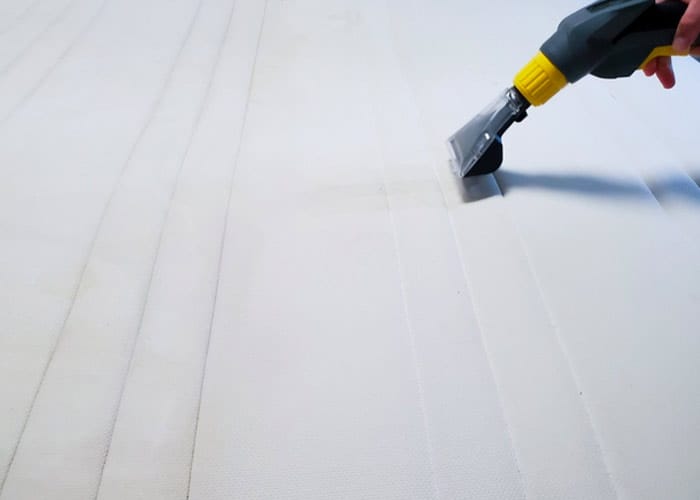 Are you looking for ways to get mould out of a mattress after finding mould growing under your mattress? I have just what you need. In this guide, we will look into removing mould from a mattress and preventing it from growing.

Contents show
1 How to remove mould from a mattress
2 How to clean mould off a mattress
3 What does mould on a mattress look like?
4 How to prevent mould from growing under a mattress
5 Last Words

How to remove mould from a mattress

The first step is to remove the mould that has already grown by vacuuming. Thoroughly vacuum both sides of your mattress.

Even if your mattress is single-sided, you are still recommended to vacuum both sides as mould has likely grown into it no matter the side as long as the environment and conditions are right.

Make sure that you are correctly empty and dispose of the vacuumed mould to prevent it from spreading.

Dampen a cloth by soaking it in soapy water. Use this cloth to remove the residue of mould on the surface of the mattress by rubbing it in circular motions.

Do not soak the cloth too much that it is dripping wet and that water seeps deep into the layers of the mattress.

This will create a moist environment in your mattress that is essentially like a giant sponge, which is the likely reason why mould has grown in it in the first place.

Air out the mattress to allow it to dry. If you can drag it into a well-ventilated area that is directly under the sunlight, such as bringing it outside or placing it on your balcony, do so.

Otherwise, just prop it up in your room and open all windows and doors to allow in as much air as possible. The goal is to get the mattress dry to prevent more mould from thriving or continuing to grow.

How to clean mould off a mattress

After removing the mould of a mattress, give it a thorough cleaning by washing the surface with disinfectant. Here is a more straightforward way to clean mould off a mattress after removing it for extra measure.

You wouldn’t start seeing mould growing on your mattress immediately. Mould starts as microscopic spores that are invisible to the naked eye, and by the time you can spot them, they will look like tiny black dots with fuzzy or blurred outlines.

These dots occur together in clusters over large areas. Typically, mould grows under dark and moist environments, so they are usually found in the underside of mattresses that aren’t turned regularly.

It’s also good to distinguish between mould and mildew as mildew requires little to no effort in cleaning. Mildew can look similar to mould but can easily be wiped off of mattresses.

If you see black-coloured mould growing on your bed, be prepared to dispose of it.

That mattress is already beyond saving as mould has already penetrated deep into its layers, beyond what regular house cleaning can reach.

Moreover, mould is hazardous to your health. It imposes risks such as allergens, irritants, and spew off toxic substances into the very you breathe, so the priority is to get rid of mattresses with overgrown black moulds that you can no longer salvage.

How to prevent mould from growing under a mattress

The common reason mould is left growing until noticeable is that mattress owners do not turn their beds. If your bed is double-sided, you should flip it as instructed by the manufacturer. Make sure to keep up with the flipping schedule.

This way, one side of your bed isn’t in contact with the floor, bed slats, or bed frame for extended periods, just the ideal conditions for mould to grow. Additionally, by keeping up with flipping, you will also be able to see any mould periods growing on the underside of your bed immediately, if there are any.

Mould grows when the atmosphere is very humid and moist. To prevent this, you need to have good ventilation in your room. You can improve your room’s ventilation by opening the windows every day to allow air to enter and lower the humidity.

Additionally, air out your mattress regularly by placing it vertically against a wall. This will keep it dry and prevent any build-up of heat and moisture, which are ideal conditions for mould growth.

Water and moisture are mould’s best friends. You want to make sure that you clean it off and dry it properly if you accidentally spill anything or cause any liquid accidents in the bed—sundry your whole mattress to evaporate and dry off any liquids.

Thanks for taking the time to read the different techniques and advice in the article. If you have black mould or just want to get a new mattress we have a list of the best bed in a box brands you will find interesting.